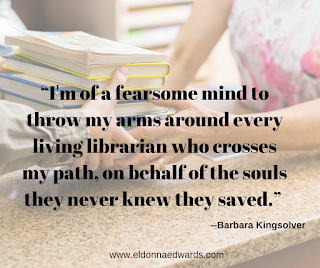 My sister taught me to read. An avid reader herself, Nita turned empty milk crates into desks, our living room into a private schoolhouse, and my younger sister and me into her wide-eyed students. It was during those not-so-lazy summer mornings and blizzardy winter afternoons that she'd assign us articles from a dog-eared set of encyclopedias to read and report on. Oddly enough, Rosemary, I loved her game of "school at home." Not just because I could sneak peeks at naked statues, but because thanks to my older sister's penchant for making learning fun, I entered kindergarten at a fifth grade reading level.

We had no library in our tiny town. The closest one was miles away and I didn't discover it until our second grade teacher took us on a field trip there. I remember crawling around on the floor like a monkey in a banana store, pulling stacks of books off the shelf and devouring them on the spot. I fell instantly in love with Dr. Seuss and all his crazy thing-a-ma-words. Eventually I graduated to The Bobbsey Twins, Laura Ingalls Wilder's books and Nancy Drew mysteries, all recommended by the smiling librarian. Oh how I loved the crunch of that stamp as she punched a date next to my name on the yellow card from the book's pouch!

Flash forward fifty years to when I received the very first netgalley* review for my debut novel, THIS I KNOW. Now, I try not to look outside of myself for validation but I'd be lying if I said reviews don't matter. Of course they do. The experts tell us authors never to read reviews of our own books. But for me, that's like putting a do-not-look note over David's junk on Michelangelo's  encyclopedia page. So of course I took a deep breath and clicked on your review.

"Once in a while you read a book that just takes your breath away with its beauty and truth. This I Know is such a book. In the mid twentieth century Midwest, 11-year-old Grace Carter tries to hide her gift from her father. The Evangelical preacher would believe that Grace’s gift for finding things, knowing things about a person’s past or future were akin to witchcraft. She certainly doesn’t want him to know that she’s able to speak to her twin, Issac, who died at birth. Luckily, Grace has her aunt Pearl who understands that Grace’s ability is a gift and who offers the only comfort the girl knows. As Grace’s own family becomes more distant, she finds friends in the community, other “throw away” people, who become her true family. This is one of the most beautiful coming of age stories I’ve ever read, and it will stay with me for a long, long time." -Rosemary, librarian

And suddenly I felt the glitter of happiness sprinkling down upon my head. Not because someone liked my book. Because you liked it, Rosemary. Someone who reads and recommends books for a living. Someone who holds the power of "yes" and with the ability, as Barbara Kingsolver said, "to save souls." I'll likely never know who you are, but I will never forget you because you were my first, my virgin 5-star review, my, dare I say...hero. I understand that not everyone will agree with your review but it won't matter. Because this? This is something no critic can ever take from me.

So thank you Rosemary for reading my book and sharing your thoughts. Thank you Nita for teaching me to read and Mrs. Swanson for taking a bunch of wild eight-year-olds to the public library. Thank you to the library patrons who read and request books. And a huge thank you to all the librarians who pull a book from the shelf and whisper, "This one will take your breath away..."

With love and gratitude,

What about you? Did you visit the library as a child? Do you still utilize your local library? Do you have a favorite go-to librarian you look to for book recommendations? What books/people set you on the path to a lifetime of reading?

*Netgalley is a website where industry professionals like booksellers, trade reviewers and librarians can read new books before they release.
Posted by Eldonna Edwards at 8:59 AM 10 comments:

The Eagle Has (Almost) Landed 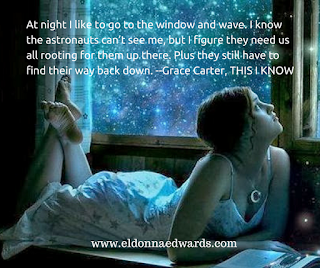 I was ten years old when astronauts Buzz Aldrin and Neil Armstrong made their historical Apollo 11 moon landing on July 20, 1969. It happened on a Sunday, between morning and evening church services, which is fortunate because had it been a few hours earlier or later, I'd have missed it. Moon landing or not, nobody in our house ever got to skip church unless they were sick. And by sick you either had to have a fever over 100 degrees or throw up, both rather hard to fake.

I know this because I tried many times to fool my parents so I could stay home to watch Wonderful World of Disney. One time I went so far as to eat pickles and ice cream, then let my sister spin me around in a plastic sledding saucer because The Wizard of Oz was going to be on. It didn't work, other than to make me queasy for the next couple hours which, of course, I spent at church. As if the upset stomach wasn't  torture enough, I still had to listen to my peers going on and on about the amazing movie at school the next day.

Not only were the astronauts kind enough to land on the moon at three in the afternoon, but they waited to take their moon walk until after evening services let out. I raced across the street and gathered around our black-and-white set with my parents and six siblings. I knew this was a big deal. Not just because we'd read about it in our Weekly Reader or because I was allowed to stay up past my nine o'clock bedtime. It was a big deal because my parents usually spent Sunday evenings lingering over coffee and pastries with one or two of the deacons and their wives, but on this night they came straight home after the last Amen.

My dad wasn't too keen on the whole space exploration thing. He believed that if the good Lord wanted us to walk on the moon he would've put us there in the first place. I don't recall much about what I saw on TV that night other than the squeals and shushing between my siblings as the big event unfolded. What I remember most is laying in bed afterward, worrying about those two men up there so far away. How the heck they were supposed to make it all the way back home? What if a whale swallowed their tiny pod when it crashed into the sea, just like the one that swallowed Jonah in the Bible, perhaps punishment for going against the laws of God?

Of course they did land safely and the rest is history, but I remain fascinated by the idea of we humans having the ambition to send a spaceship to the moon. Nearly fifty years later I realize every grand idea starts with a small spark of imagination. For some, it's the idea of planting a flag on the moon. For others, it's merely planting one word in front of the other, day after day after livelong day. Y'all are my rocket fuel. And when that book finally hits the shelf? That's my eagle landing. That's my flag. One small step for a woman. One giant leap of faith.

What about you? Where were you when Apollo 11 landed?* What small steps are you taking to launch YOUR dreams?

*For those of you born too late, ask your parents. ;)

Only 106 more days until THIS I KNOW launches. Now available for Pre-order Online or at your favorite indie bookstore. 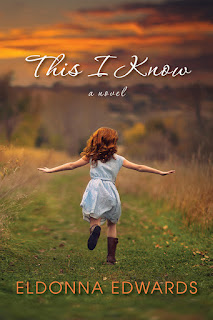 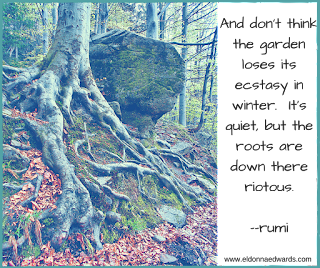 A little before midnight on the very last day of 2017, I emailed the revised manuscript for my next book to the publisher. As the document whooshed its way toward New York, I felt a little thrilled and a little lost. Having been totally immersed in editing this story for the last two months, the realization that I was finally done was both liberating and terrifying. My first thought was, it good enough? That thought was immediately followed by, now what?

People often ask writers where they get their ideas. The obvious answer is that we get them from life, from our experiences, and from the what-ifs that hit us in the shower or the grocery store or while driving. (All places, by the way, where you are least able to write them down.) But beyond the spark of ideas there needs to be an inner voice nudging us to tell a story. Not just the story we want to write, the one we must write.

The idea for my debut novel was gifted on a platter, nay, a silver-plated communion plate. As the daughter of a rural evangelical minister, I teethed on the back of church pews. I  think I always knew I'd someday write this book.

From the Author Notes in THIS I KNOW:

Every story begins with "What if...?" and here's where truth and fiction part ways. What if my dad had been a bit of a tyrant rather than the loving, compassionate, imperfect man that he was? What if instead of a rebellious teen with a wild imagination, one of his children was born with something that challenged his deeply-held convictions?

And from there, a story about a clairvoyant preacher's daughter who comes of age in the 1960's Midwest took hold.

My next book, the one I just sent off to the publisher, was borne of a lifelong fascination with the cultural revolution. Having grown up just a beat behind the peaceniks and flower children, I missed out on Woodstock, Haight-Ashbury and the idealist generation of hippies who turned on, tuned in and dropped out. I used to fantasize about living in a commune, learning from enlightened masters, and living off the land. In writing my next book, I turned those imaginings into the story of a young boy who grqapples with invisible loyalties as he comes of age among a ragtag group of offbeat characters who live at the Saffron Freedom Community in Northern California. There's a guru, a midwife, a Vietnam deserter, a surfer, a yoga enthusiast, a tarot card reader and a runaway teen, among others. All that's missing is Ken Kesey's bus.

Now that the first book is about to launch and the next one is written, I've discovered that the ecstasy of accomplishment is sometimes encased in a thin shell of panic. Unlike the first two novels, book number three hasn't burst forth from my consciousness, screaming for attention. I have a few ideas germinating but they're just tiny seeds. I guess you could say it's the winter of my creative cycle. But the thing about seasons is that they change, and I have to trust that those riotous roots are conjuring up a hell of a good story. In the meantime, I'm pretty excited about the one that's about ready to be born. 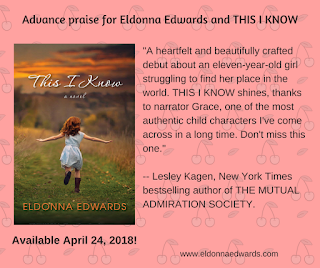 Posted by Eldonna Edwards at 9:11 AM 2 comments: