On a Swing and a Prayer 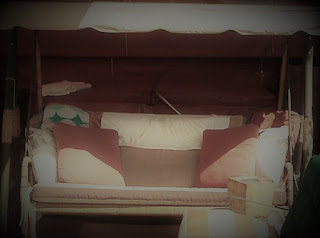 I thought about years. How they take so long. And they go so fast. --Beth Nielson Chapman

We threw our tennis gear in the back of the car in hopes of getting a couple sets in before the sun went down but first we needed to stop for a quick look at a patio swing I'd found on craigslist. Brer and I were already cutting it close time-wise but I didn't want to risk losing the swing to another possible buyer. We're moving at the end of the month and it looked perfect for that sweet spot on the back deck with a view of the ocean.

Google maps led us to a twin home in Arroyo Grande with a stucco fence and an open garage door where the owner of said swing greeted us with a firm but cheery handshake. She led us to the back patio, flowered flip-flops clapping along under tanned sturdy legs. At one end of the fenced-in patio sat the swing, compete with custom cushions molded to a human being who'd spent a lot of time in that swing, namely her late husband, Ed*. The rest of the area was set up like a lanai with decorative ceramic fish, tinkling chimes and brightly colored pillows. We later learned the patio was a reflection of the many years she and Ed had spent living in Oahu.

We never made it to tennis. Over the next hour my beau and I gently swang in the canopied glider as Helen* talked about her beloved, their shared sense of humor, and a deep loving friendship. He was a hard worker, handsome and athletic, taken down in less than a month by an aggressive melanoma. The swing was his favorite place to relax after working on their property a few miles away where they grew avocados and other fruits and veggies. It sat in front of the hot tub, shielding neighbors from a view of the naked couple still very much in love in their 79th and 81st years.

In addition to our love of sunny California, we learned that the three of us shared a common upbringing in the Midwest, a trifecta of South Dakota, Minnesota and Michigan. "Did you say wash or warsh?" she asked, the true test of a Midwesterner. I think we passed the test. Not because of our shared former dialect but because she felt safe enough to drop the Midwestern stoicism and reveal more about his illness, her grief and loneliness, how she'd held her beloved's hand as he took his last breath and promised him she'd never leave. How they lost their only daughter five years before. How after nine months she's learning that she can keep the memories alive without clinging to all the stuff that's weighing her down. Little by little she's starting to let go of things. Like the patio swing where we sat, having earned the honor of becoming the new owners.

As we drove past the tennis courts on our way home my beau squeezed my hand and smiled. Funny how what you think is important suddenly pales in comparison to sitting with someone as they transform from a craigslist stranger into a human being with a story that's now a part of your story. I can't wait to set up the swing on our new porch and raise a toast to Helen and Ed. I've already dubbed the swing Harriet so I can sing "Swing Low, Sweet Harriet" because I think Ed would laugh at that.

*Names changed to protect the individual's privacy
Posted by Eldonna Edwards at 12:23 PM No comments: