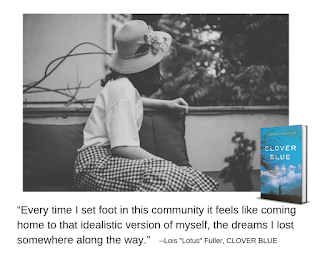 "Life gets mighty precious when there's less time of it to waste." --Bonnie Raitt

I remember when my mom turned fifty and all hell broke loose in our house. She shuffled off the yoke of her existence as a devoted pastor's wife and went back to college to expand her horizons. Mom would stay up late, poring over books and homework. She eventually graduated with honors, using her degree to become a financial aide counselor at the same college she'd attended.


Although he lovingly supported my mother's educational aspirations, I think on some level my dad mourned the loss of his dutiful wife, and realized that her going back to school was likely the first step of his beloved's path to asserting her autonomy. And he was right. My mom was barely twenty when they'd married. Forty years and seven children later, they separated. My dad was heartbroken. My mom, on the other hand, bloomed like a rose, until the piercing thorn of cancer took her permanently from all of us at the age of sixty-four.

Saffron Freedom Community, the 1970s commune in CLOVER BLUE, is full of youthful people who aspire to create a Utopian society free from the constraints of social norms. Except for a couple of trusted neighbors, outsiders are forbidden from entering SFC. One of those exceptions is Lois Fuller, the farm wife who buys eggs from the commune that borders their property. Mrs. Fuller is a former school teacher who once had aspirations of studying art. She loves spending time with the Saffrron children, encouraging them to explore their interests in art and literature. The more time she spends at SFC the more envious she becomes of their lifestyle, eventually going so far as to want to join them:


“Look, I know I’m a lot older than all of you, but I’ve been every age you are.” She turns toward Goji, who listens thoughtfully. “Every time I set foot in this community it feels like coming home to that idealistic version of myself, the dreams I lost somewhere along the way.”
Goji leans forward, resting his elbows on the table and his chin on his hands. “You are like a flower, opening. So very beautiful. I think we should call you Lotus instead of Lois.”


Lotus reminds me a little of my own mother and a lot of myself. Today, on Mother's Day, I want to honor all those mothers who made huge sacrifices to care for the children and those who chose to pursue their dreams, simultaneously or eventually. I also want to honor the women who either couldn't or chose not to have kids. Mothering isn't about giving birth so much as it's about nurturing. We are all mothers in one way or another. Some of us plant gardens. Some of us protect and care for the planet and her creatures. Some of us make art. And some of us write books.

Only two weeks until the release of CLOVER BLUE. If your mother grew up in the 1960s/1970s she might enjoy this book. And you might learn a little something about her...
Available for pre-order now. 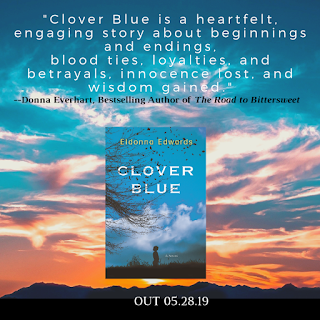 Posted by Eldonna Edwards at 12:25 PM