Everybody Loves Rain: When the "New Girl" Shows Up 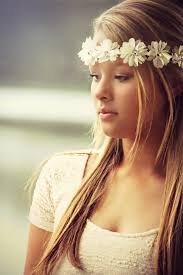 I distinctly remember the day Michelle* first appeared in the halls of our high school during the Spring of my sophomore year. A natural beauty, the shiny, new brunette immediately turned heads. My testosterone-fueled classmates were less than obvious in their remarks as Michelle's perfect body with perky boobs, a full head of gorgeous hair, and a perfect mouth that framed sparkling white teeth, breezed past us on her way to class. Of course, we girls stared, too. Michelle was a freak of nature, carved from some unnatural combination of drop-dead-gorgeous looks and bubbly personality that made it difficult to dislike her, even after she'd plucked your boyfriend from under your arm while you were home recovering from mono.

I knew early on while writing CLOVER BLUE that although life in a commune would be far from boring, there's nothing like having a stranger arrive to shake up the status quo. Early in the story, a young runaway shows up, guided to Saffron Freedom Community by an estranged former member. The men fawn over the new beauty while the women become overly-protective of her. Despite the free-loving nature of the community, one is never sure if the sisters are more worried about the men seducing this naive young woman or her seducing them with her charming innocence.

What follows is an excerpt from CLOVER BLUE, where young Blue watches as the commune's leader welcomes his newest protege:

The girl stares at her tennis shoes. Other than a smeared dirt hand print on the front of her white pants, she looks like a townie; clean like she just climbed out of a bathtub. She’s so beautiful I can’t stop staring.
Goji puts a finger under the girl’s chin and lifts her face. With his other hand he sweeps the curtain of white-blond hair out of the way and looks directly into her bright eyes. I can tell by the blotches on her light skin that she’s been crying. I can also see that she’s already under Goji’s spell. That’s just the way it is with him. 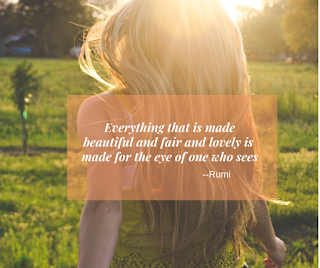 From the time we're babes, we humans long to feel special in the eyes of those we love. It's no surprise then that when a stranger's light threatens to cast us into their shadow, our first reactions are jealously, fear and resentment. Hopefully, as in the case of my high school friend Michelle, we come to judge that person based upon who they truly are rather than any threat to our perceived ranking among family or peers. In my case, I was fortunate to remain friends with Michelle, long after she traded in my ex-boyfriend for a new one.

I loved creating these ragtag characters and I'm looking forward to introducing you to them one by one in the weeks leading up to the release of CLOVER BLUE. In the meantime, think about a time when a stranger showed up in your life. Do you tend to hold back until you get to know a new person, or are you a virtual Welcome Wagon, embracing newcomers to your circle with open arms?


*Name changed to protect privacy. Sadly, like many bright and beautiful beings, we lost "Michelle" much too soon when her life was cut short by breast cancer. This post is dedicated to her beautiful memory.

Out On A Limb: World-Building From The Ground Up

When I was a young girl I envied our neighbor's adorable playhouse, a miniature home with tiny windows and a real roof, set back among the trees in their back yard. The little house had long been abandoned by their grown daughter but my sisters and I were not allowed to trespass on their fenced property. That didn't keep me from admiring the secret hideaway from our side of the barrier, which seemed more like a wall than a fence when you're a small child.

What I remember most about the playhouse is the ache of jealousy I felt. I've always been a fan of cozy places. I used to love building forts under sheets draped over tables and sofas or between bales of hay in my friend Paula's old barn. I often hid in the linen closet on the second floor of our five-bedroom parsonage where I crawled between the shelves and wrote secret messages with glow-in-the-dark Play-Doh on the board above my head. One of my other favorite places was the small space between the washer and dryer where I would drag a blanket and let the warm rumbling and churning lull me to sleep. I also loved to hide in closets, a habit that helped inform young Grace Carter's visits with her deceased twin in my debut novel about a clairvoyant preacher's daughter, THIS I KNOW.

Fast forward to my teens when my dear dad gifted us with the best thing ever, an A-frame tree house nestled into a huge tree on the east side of our new house. At first it was a novelty to my younger sister and little brother, aged eight and twelve, but they quickly bored of it. Not me. I practically moved in, covering the walls with square carpet samples donated by Burcon's Furniture Store, coincidentally owned by the same family who'd lived beyond The Great Wall of our earlier home, the one with the forbidden playhouse and teenagers frolicking in an in-ground swimming pool, also off limits to my siblings and me. At age fourteen I carried my guitar up the rickety ladder of the tree house and sang Joni Mitchell songs and wrote a few aching love songs of my own. Mostly I sat  with my legs dangling off the edge of the plywood floor, scribbling bad poetry, my fort swaying as the branch yielded to moody Michigan winds.

Given my love for trees and hiding places, it likely comes as no surprise that as a volunteer
screener with our local film festival, I fell in love with a 2009 documentary about a group of free-spirited young people who formed a coalition of independent island-dwellers on the north beach of Kauai. I've long been fascinated by the revolutionary 1960s, the communes, the sloughing off of traditional family structures in favor of tribal life. I've fantasized about living in an intentional community.

At one point I turned my empty-nest home into a sort of boarding house and filled the rooms with young women who needed a safe place to live. My "girls"  christened our house The Urban Oasis. They've long-since moved on, some now with families of their own, but those young women will always be remembered as part of my evolving tribe. I now live in a tiny converted garage next door to that house, what we call a granny unit here in California. I recently built myself a "playhouse,"  that serves as my writing studio under a Yucca tree in the back yard. Okay yes, it's my grown-up fort. It even has a hanging swing chair.

It's been almost a decade since I first began to conjure a story that incorporates my love of cozy places with my curiosity toward communal living. In about twenty weeks that story will hit bookstore shelves. In CLOVER BLUE, the members of Saffron Freedom Community reside among ancient live oak trees, the largest of which supports their many-roomed tree house. They live free from the weight of cultural norms. Free of clothing, if they wish. Free from overcrowded classrooms. Free to raise their own food and treat illness with herbal remedies rather than Western medicine. But as in all civilizations, freedom requires self-regulation, lest people begin to treat their claimed liberation from society's rules as a sense of entitlement. This concept is the moral challenge I sought to pursue through the eyes of a young boy who grows up dedicated to the precepts of his idyllic community and the tribe he loves. That is until he begins to question everything he's ever learned in his quest for truth, beginning the day the family midwife is preparing for a communal birth.

I want to be excited, but I'm a little freaked out. I'm worried Jade's baby might not survive, just like the baby goat that got sick and died. Goji forbids doctors and hospitals. We believe in natural medicines. Sirona probably knows what she's doing, but what if she doesn't? What if none of them know what they're doing? --Clover Blue, age 10

I'm counting down the days (145!) until y'all get introduced to young Clover Blue, his best friend Harmony, and the rest of this ragtag clan of tree house dwellers. In the meantime, tell me about your favorite hiding places, your dream oasis, your sacred spaces. Where do/did you go when you need(ed) a quiet place to dream?

I'll leave you with this delightful Shel Silverstein poem from his book, Where The Sidewalk Ends.

A tree house, a free house,
A secret you and me house,
A high up in the leafy branches
Cozy as can be house.
A street house, a neat house,
Be sure to wipe your feet house
Is not my kind of house at all-
Let's go live in a tree house.

Posted by Eldonna Edwards at 8:25 AM 2 comments: