How to Grow A Guru 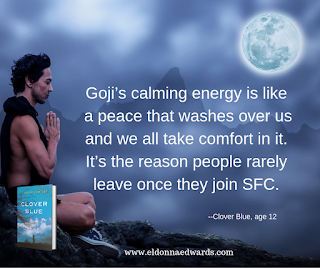 "Goji is the leader, but he doesn’t call himself that. He is kind of a guru, though, and everyone looks up to him." --Clover Blue, age 10

gu·ru
/ˈɡo͝oro͞o/
noun
A spiritual teacher, especially one who imparts initiation.
My dad was my first guru, an evangelical minister who led congregations with his engaging personality, and who inspired the idea for This I Know. My second guru was Gabrielle Roth, although I never met her. I did, however, watch her videos, dancing along wildly until I forgot where the floor left off and my feet began. I loved the Five Rhythms as Roth called them, a series of musical selections that beckoned one to move blissfully through varied rhythmic dances. I was so drawn to the spiritual and physical practice I ended up facilitating my own Ecstatic Dance gatherings for a several years.

Gabrielle Roth certainly had innumerable followers but she'd likely never call herself a guru. Her goal was to convince others to turn inward using movement as a vehicle for meditation, self-exploration, and, ultimately, personal freedom. Likewise, in creating Goji, the founder of Saffron Freedom Community in CLOVER BLUE, I wanted to explore the idea of unintentional gurus, people who hope help others free themselves from outward attachment, only to become the object of  blind devotion. And therein lies the challenge of the human ego. As many celebrities will admit, it's difficult not to lose oneself in the thrill of adoration. History teaches us that worship comes with potential abuse of power.

Goji started out as a regular guy. His parents expected him to follow in his father's lawyerly footsteps. A combination of a young man's reactionary personality and a 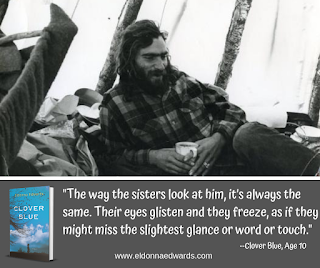 burgeoning cultural revolution gave birth to a generation of seekers. Goji was swept up by a desire for more meaning in his life. He traveled to Asia, where he studied Sufism, Buddhism, Taoism and other various teachings. He eventually returned to the states and became intent on creating a spiritual commune free of societal norms. Saffron Freedom Community was born in 1967, an off-the-grid commune in Northern California filled with other disillusioned young people seeking to escape the rat race.

When the commune became over-crowded with people who abused drugs, didn't carry an equal work load, and weren't respectful to nature, Goji created a manifesto of sorts that included a set of guidelines. The Book, as members call it, included a commitment to  daily yoga and meditation, equal work load,  vegetarianism, sacred sexuality, and rejection of Western medicine, among others. Most of the members fled, leaving a close-knit group devotees that become family.

All of the above happens years before the book opens in 1974, when Clover Blue is  ten years old. By this time a slow but steady shift has occurred. Despite his proclaimed rejection of tribal hierarchy, Goji has risen to the position of leader of the SFC family. As he comes of age, young Clover Blue begins to more closely measure his beloved teacher's actions. Will Goji choose to cultivate the tenets of his supposed enlightenment or exploit the devotion of others to assuage his own unmet needs?

**********
Two months to go before CLOVER BLUE releases, but the publisher is offering 25 copies ahead of publication on Goodreads! Giveaway ends 04.04.19. Good luck! 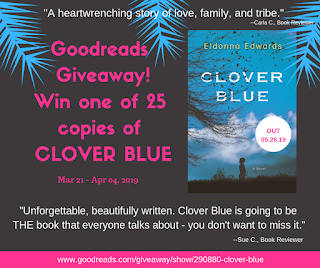 Posted by Eldonna Edwards at 6:49 AM