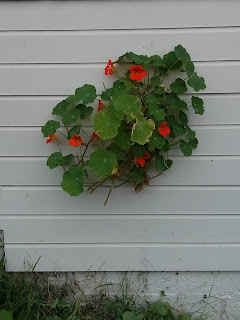 A couple years ago this nasturtium crawled across our yard, into the neighbor's yard, and over their walking path. Sadly, the gardeners cut it down. Not to be deterred, the plant snaked into the foundation, twined up a basement wall, and found its way back to the light through a tiny crack in the siding. From my window the plant appeared to be floating like one of those gurus who levitate above the ground. But this isn't an illusion.  This flower succeeded simply because it persisted. It was not in its nature to give up.

Eighteen years ago I started a novel about a psychic little girl born into an Evangelical Christian family who is shunned for her intuitive gifts. I queried and found an agent who liked my other, more contemporary work-in-progress better. She shopped it around but she didn't sell it and eventually stopped communicating. To say I was disappointed is an understatement. But I was facing other challenges and my writing suddenly took a back seat to Life. I got sidetracked by a divorce, a move, my busy massage practice and being a single parent.

Both of my earlier manuscripts languished in a desk drawer for several years. I continued to facilitate journaling workshops but it wasn't until I donated a kidney to a stranger that I fully returned to writing, publishing a memoir in 2014 about my experience as a living donor. Lost in Transplantation did pretty well for an unknown self-published author but relating one's experience in book form is a lot different than creating setting, characters and story from scratch.

I wrote the memoir to educate people about living donation. Writing a novel is a whole 'nother ballgame with different rules, a different audience, and a much more competitive playing ground. This plant, though. Just look at it. Somebody cut it down and it defied that somebody in ways that confounded and amazed me.  The more I stared at it, the more I wanted to be like it. I eventually found the courage to show my original ms to my editor/beau. And then I held my breath while he read it, knowing he would be kind but he'd also be brutally honest.

Turns out he loved it. And he worked with me to make it even better. Several months later I queried a list of reputable agents and in December of 2015, signed with one who sold the ms in a 2-book deal. THIS I KNOW releases around Mother's Day of 2018, a timely coincidence for a story with a mother who features prominently in this emotional story of a family torn apart by fear and judgment but ultimately, the redemption of acceptance and forgiveness.

A few weeks ago my publisher sent me a sneak-peak at the cover and I admit that I succumbed to shiver-me-timbers of joy when I saw my protagonist captured on the cover image. Grace Carter is no longer a figment of my imagination. My precocious little redhead now belongs to the world. Coincidentally, I just finished the next book and sent it to my agent for notes. Now the process starts all over with a new cast of characters, a distinct landscape, and a very different story. The work doesn't get easier but for the most part, fear and self-doubt have transformed into anticipation and optimism.

My point is that persistence pays off.  To those of you struggling with uncertainty or who feel like quitting: Don't. Why choose to stunt your creative pursuits with self-limiting beliefs? Tunnel your way into the center of your dreams and plant yourself there with vigorous intention. Manifesting is awesome but it isn't magic. It's a combination of dreaming, surrounding yourself with people who support your dreams, a lot of work, and a little bit of good luck.  The march to success is a team event. Each triumph, no matter how small, finds me jumping up and down in solidarity with every one of you. Without each other, without our mentors and believers and champions, this journey would be a lonely road. And so I remain deeply grateful to all you wonderful humans who continue to be my cheerleaders. Believe me when I say, I am also yours.

Posted by Eldonna Edwards at 2:15 PM